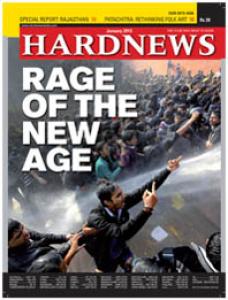 One Sorrow Too Many

Trapeze Artists in a Public Square

The protests in Delhi and elsewhere have become a collective catharsis, a cry for help, an angry assertion of the right to free movement, a life of dignity and freedom from fear of rape. But what will it change?
Rahul Roy Delhi

If Rahul Gandhi is a youth leader, how is he so totally disconnected from the thousands of young on the streets?
Sanjay Kapoor Delhi

Fire in the Eye

Something had split apart, something had broken, hearts were broken and eyes were glazed. Fingers became fists. Fists were clenched
Amit Sengupta Delhi

HIMACHAL PRADESH: Back to Nature?

Despite the BJP’s muscle-flexing, the Congress victory in the hill state, led by Virbhadra Singh, was predictable
Rohit Negi Kullu

Rajasthan: The Slavery of Modernity

Rajasthan: When children die of hunger

Invoking Marx and Engels’s German Ideology, Anderson’s book sets out to test the ‘idea of India’ against the reality
Rajesh Sharma Delhi

Women became second-class citizens in Iran after the Iranian revolution of 1979. After the revolution, the Islamic regime forced veiling, invoked polygamy, gender segregation, surveillance, and revoked laws under the Shah which gave limited space and freedom to women
Shakeel Anjum Delhi

Rajasthan: The Medicine of Life

The free medicine project in government hospitals, including life-saving drugs, has arrived as a life-giving miracle for the people of Rajasthan, especially the poor, who were hitherto devastated by the huge cost of healthcare
Sadiq Naqvi and Akash Bisht Baran/Jaipur

All the young ones in the locality seemed to have withdrawn, there were no bonfires, not one cracker was burst, no dancing and partying, not one sound of a loud ‘Happy New Year’
Amit Sengupta Delhi

When Cairo’s Tahrir Square erupted against President Mohammed Morsi’s attempts to usurp all powers, the divide was clearly visible. On one side were the Islamists, represented by the Muslim Brotherhood and Salafis, and on the other were the secularists, animated by Muslim liberals, Coptic Christians and many of those keen to protect the secular ethos of the Gamal Abdel Nasser era. Women provided the spine to this opposition to Morsi as they feared losing their rights once the sharia laws began to sideline existing ones.

There is absolutely no way of knowing whether Muslim people annoy Narendra Modi as much as Jewish people had annoyed Austria-born Adolf Hitler who instigated and then lost the last world war.

But both Modi and Hitler are mentioned here in the same breath because of a sense of deja vu over the euphoria in Gujarat today.

While I’m really looking forward to 2013 with my fingers tightly crossed and several good-luck charms like four-leaf clovers cluttering my bedside table, I think it’s worthwhile to also look back at 2012. What are the important things we learnt, and such like. So, here goes: