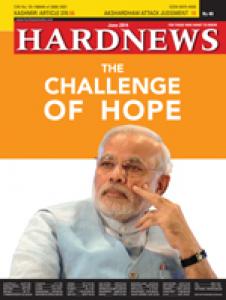 Geopolitic troubles haven’t abated for Ukraine ever since it was formed from the debris of the Soviet collapse, but the recent crisis is simply a symptom of the East-West confrontation
Sabika Zehra Delhi

The SC’s recent acquittal of five of the six accused in the Akshardham attack case, citing “gross violation of fundamental rights” by the lower courts and investigating agencies, exposes the dangerous nexus between the lower judiciary and government machinery
Manisha Sethi Delhi

THE AUDACITY OF HOPE

After the soaring mandate, and expectations from Modi to hit the ground running, the government’s responsibility to usher in a new dispensation of reforms and governance has never been greater
Sanjay Kapoor Delhi

MODI’S CLEAN Saffron SWEEP of UP

With the steady rise of the Sensex and FIIs since the September 2013 announcement of his candidacy, Modi may have been holding the bull’s horns the entire time
Sukumar Muralidharan Delhi

LET THE NEW GOVERNMENT EVOLVE A POLICY ON KASHMIR. THEN WE CAN DISCUSS ARTICLE 370

After years of bartering Dalit and backward caste interests, Mayawati and the BSP’s fall is no shock; what’s surprising is how far and how fast
Anand Teltumbde Kharagpur

IS THE EC A BURDENED MIDWIFE?

The Election Commission has exposed its vulnerability in delivering a free and fair elections, owing to the systemic misuse of money and power in manipulating polling booths across the country
Sanjay Kapoor Delhi

Mukul Sinha: Man of many moments

On May 27, a young woman was killed in Lahore, outside the High Court.

The ink had hardly dried from Narendra Modi’s signature as the country’s 15th prime minister when news poured in from Europe that it had voted for the Right.

Reportedly, Marine Le Pen, leader of the far right Front National (FN), too, cried with joy after her triumph in the recent European Parliament elections that have propelled to power an angry but motley crowd of radicals, from xenophobes and racists to neo-Nazis.

The verdict is out. The BJP is set to govern the country for the next five years with a prime minister some of us are so frightened of that we’re toying with the idea of running away to other continents. I urge people not to leave in a hurry, though. Be patient—don’t forget BJP leader Giriraj Singh’s nasty threat of banishing critics to Pakistan. Let him pay for our one-way tickets! We’re aware that the BJP got big money from greedy corporate India for the elections, I’m sure they can part with some loose change.